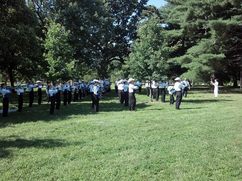 It was a dark and stormy night. The girls’ bus pulled over to the side of the expressway as the heavy rain pounded from all sides. Lightning flashed around us as we sang every hymn we knew. Unbeknownst to all, the drums were being drenched in the downpour.  As a few mothers held a garbage bag up to the leaking roof of the bus, there came a cry, “We need duct tape!” Illuminated by a flash of lightning, a figure appeared, arm raised, and heroically exclaimed, “I HAVE DUCT TAPE!” It was Sarah Gonyer, tuba player and friend to all. The leaks were efficiently taped, the storm calmed, and we were on our way.
We arrived at Cracker Barrel, sleep deprived but excited, and enjoyed our large breakfasts. I believe everyone would agree, however, that the gift shop was the best part. From slide whistles and yo-yo’s to biting wiener dogs and flying pigs, it was extremely entertaining (especially to homeschoolers).
Cameras clicked as we got our first glimpse of the Gateway Arch in St.Louis. Only four more hours to our destination: Branson, home of Country Music!
Finally the busses pulled into a parking lot next to the Grand Village shops in Branson. Many found their way to Mel’s Hard Luck Diner, where they were entertained by the singing waiters and waitresses. Mr.Stiles received extra special attention...
That evening we arrived at the Dixie Stampede! Soldiers dressed in Civil War attire made their way into a wide dirt arena as a great big man shouted with much enthusiasm, “Let’s hear it for the NORTH!” The crowd shouted ‘BOO!’ or ‘HOORAH!’ “Lets hear it for the SOUTH!!” ‘BOO!’ ‘HOORAH!’ The noise echoed throughout the building. “The chicken was amazing,” Brielle Denooyer exclaimed, “and the horses. I loved the horses!” (I hope Brielle was talking about the live horses!)
The next day, we made our way to the Shepherd of the Hills Fish Hatchery, Table Rock Dam, and we visited the College of the Ozarks, one of the seven members of the Work Colleges Consortium. We also made a trip inside the college museum, which had a surprising amount of artifacts, including the original Beverly Hillbillies car as well as large gun and taxidermy collections. When asked about the museum, Courtney Ford replied, “They had a very good variety and quantity of artifacts. The guns were awesome!”
Many of the students then went swimming before heading off to see Sight and Sound Theatre’s production of “Jonah,” which was complete with a giant faux whale and live animals.
On the third day of our trip, we packed our luggage and were down to the bus by 6:45am. We were driven through Fantastic Caverns, where we were told by our driver that, “Pillars are called columns down here ‘cuz you sleep on yer pillars.” That gave us all something to laugh at! The acoustics were incredible down in the caves, so we sang a verse of Amazing Grace that I will never forget.
For lunch, on our way back to St.Louis, we stopped at Lambert’s Cafe, ‘Home of the Throwed Rolls’. The name is quite self explanatory. Catch the famous rolls or you go hungry! Well, maybe not quite. There was plenty of other food to eat there as well. Some selections included fried okra, mashed potatoes, a “light” chef salad ten stories high, chicken and dumplings, and mugs of your beverage about 6” in diameter!
We arrived at the St.Louis Zoo just on time for the Family Parade, after spending the afternoon contorting balloons into many funky hat designs.  The marching band performed well at the Family Parade in spite of some tricky challenges. Mr.Stiles praised the band, “You kids are great because of your flexibility.”
In the evening, many band members enjoyed playing cards and chatting in the hotel lobby, while parents leaned drowsily on the railing saying, “Five more minutes....”
Then the big day finally arrived; the parade we had all been waiting for was here! The St. Louis Veiled Prophet Parade! The Veiled Prophet Organization strives to, “enrich the quality of life in the greater St. Louis community.” They also create large floats and participate in the parade. “ The kindness of the other bands,” is what Caleb Ford liked the most about the parade.
After the parade, we ate at Grant’s Farm, a farm that General Ulysses S. Grant founded and farmed in the 1850s.
The Gateway Arch is an essential part of any visit to St.Louis. Thus, the Northern Lights Marching Band made their way towards the towering, sleek, glistening masterpiece. Our experience there began with a brief movie about how the Arch was constructed, and then the long anticipated trip up in a tiny circular capsule, each containing five seats, began. “My favorite part was looking down on the Mississippi River, (once we got to the top)” said Jordan Evans, “because it reminded me of the Percy Jackson books by Rick Riordan.”
After that adventure had ended, the band watched an Imax movie called “Lewis and Clark-Great Journey West,” which was another superb feature of our trip. Some band members were able to view fireworks by the riverside, while others enjoyed dinner.
Tim Adamson said he enjoyed “everything” about the trip, and after much contemplation, Mr.Stiles told me that, “Because I have never been to this, probably the Fantastic Caverns (was my favorite stop).”
I walked through the damp grass by the Arch, and the moon shone brightly across the lawn. I thought about what a blessing all the people around me are! I am so thankful for everyone who coordinated anything involving the St. Louis Trip: the Marches, Mr.Stiles, my family, all families and teachers, and WMHFA. The list goes on. The trip was an absolute blast, an experience I believe every musician should have! Although the Northern Lights’ Great Journey Southwest has ended, our light continues to shine.