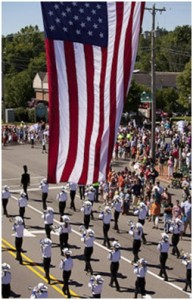 Northern Lights Home School Marching Band is an exciting opportunity for WMHFA  students to let their “Light” shine before thousands of people each year. The  Marching Band season begins with one week of band camp (day camp) and continues through the summer months. Students meet weekly on Wednesday mornings to rehearse for the parades they will be performing in. The Marching Band often  performs at the Ionia Free Fair, and the Grand Haven Coast Guard festival as  well as at several other “local” parades.  In addition, in some years, the  Marching Band goes on tour. Past tours include Philadelphia, Pennsylvania; New York City, New York; Washington D.C.; Atlanta, Georgia; and Gatlinburg, Tennessee.

To participate in Marching Band in the summer, students must be enrolled in the previous Concert Season. This band is available for ALL Band students who memorize the music and can march the routine while playing.